Donkey Tails and other Random Facts

It was a breezy summer morning and we strolled along the beach. My husband and I walked hand in hand as the children ran ahead leaving footprints in the damp sand – the right kind of sand for building sand castles.
The seagulls squawked their squawky melodies rudely breaking the silence of that very quiet morning. As I looked around, I soon came to realise we were alone, there was no one in sight, not even a donkey, not a single one.
Something was wrong. It was a popular resort, the weather was reasonable, the seagulls were inviting and the sand was perfect for sculpting; so where were all the people, and most importantly, where were the donkeys?
I looked at my husband and squeezed his hand. He gave me a smile and assured me all was well. It was Friday after all. We might have been on Holiday but for others it was work as usual, the children were at school and as for the donkeys, well, the donkeys were having a day off. 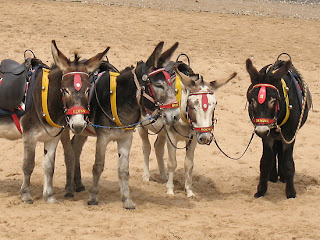 There are about 400 working donkeys in the UK, of which 200 reside in Blackpool. It is therefore no surprise that there are regulations seeking to protect the animals from exploitation. They have a day off each week, on a Friday, a one hour lunch break and can only carry up to 51kgs.
I have never been to Blackpool, nor have I ever ridden a donkey. This is just one of the many pieces of trivia I've heard around the Production office as a shoot was being re-scheduled and scripts re-written to fit the real world. Writing and filmmaking can sometimes be a source of accidental knowledge, you become an expert at something you previously had little or no interest in.
Here is a list of a few of the things I have learned over the years:

·      When hiring a Drag Queen for a shoot, allow at least an hour for make-up
·      If someone asks you for a Paracetamol on set always say no, especially when there’s a nurse present.
·      Using a starting pistol for a shoot requires an armourer on set, even if it’s decommissioned. There should always be two people present when transporting the weapon, the armourer and a supervising armourer. The police need to be informed too!
·      It is possible to flip pancakes whilst running a marathon.
·    I now know how to make fake blood – the edible version
·      Filming with animals is expensive
·      If you plan on filming at Cannes do not book your flight and accommodation last minute unless you want to end up out of town or somewhere really really expensive
·      There is a small island north of Scotland called Shetland. They farm cod fish.
·      Travelling to a location for 48hrs with little or no sleep is not recommended
·      Thorpe Park is closed for maintenance on Tuesdays – and therefore perfect for filming without the added hazard and noise of crowds. On the other hand, having 12 turns in a row on a rollercoaster is not for everyone.
·      Haggis really is just a lamb sausage made with more spices, although I’m still not convinced about trying it. Incidentally, you can’t get it through customs into the US
·      With a few props a meeting room/ office space can double up as almost anything. The corridors around the offices at Elstree for example are painted like hospital corridors so they can be easily used for filming Holby City.
·      When at the BBC, if you get asked about the positioning of a DOG on screen, you do not search for a four-legged animal wagging its tail
·      If you work for/at the BBC you are required to do an extensive Health and Safety course and after that you never ever breathe again without filling in a form detailing the type of breathing, where and how you will be breathing, what risks are present in breathing and what measures you will be taking to prevent any of the risks. You are also fully aware of who gets blamed if you breathe in the wrong way. Oh and you get to see Anthea Turner on fire.

What facts have you come across accidentally or as part of your job, which you haven't actively sought out?