Child's Play: Write What You Know?

As some of you may have noticed, I’m a sucker for competitions. I work best to deadlines and therefore jump at the opportunity of entering one more comp. It is also a welcome distraction from all those re-writes that I should be doing instead.

When CBeebies therefore announced their script competition Get A Squiggle On I was very excited. This is certainly something I know about.  I am a mother of two under the age of 4 and children’s TV is probably watched more than any other channel in this house. Having also worked on the promo team for Cbeebies I decided that I knew enough about the channel to write a twenty-minute script for an original live action programme.
I started to think about the various kids’ programmes and their content, which ones my son liked the best and why. It seems that no matter what the message is, the main characters are all very lively and exaggerated caricatures being mostly grown ups or older children. In Grandpa in my Pocket for example, the characters’ names tend to reflect their personality, such as Mr Whoops, Mr Liker Biker and Captain Shipshape amongst others. The characters in Balamory are equally all exaggerations of real people who live in a charming village with houses all painted in a different colour – being the use of primary colours another characteristic of kids’ programmes.
Music is key and whether it’s just the opening/ closing sequence or throughout, it is important to have a catchy tune with memorable and easy to learn lyrics. When they get it right, the children will be singing it over and over and over. This is great for the programme makers, not so good for the parents’ ears. 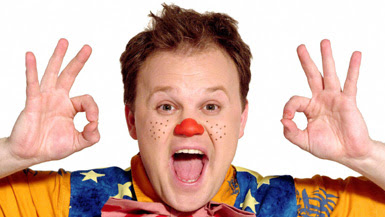 Finally, there is a formula that all episodes will follow. In Something Special, for example, there are intercut sequences between Mr Tumble and Justin as well as the use of Makaton signs. The viewer knows that no matter what the theme is, it will always start and end with Mr Tumble.
The duration of 20 minutes is a challenge but if you have a good strong formula to set the pace with characters and topics that the child can relate to, then hopefully it will keep the child engaged.
Taking all of the above into consideration, I started to brainstorm. Many different ideas later it seemed that it had either already been done, or it wasn’t really something I would want to watch myself. Eventually, Taro suggested we adapt a short he had been writing. It would have to be changed from dark comedy to a more colourful and child friendly version, but it could work and should be fun.
After a week or two of talking about it, we came up with a workable outline that could be adapted to any episode and I started writing. Five pages in I got stuck and I got bored. As Taro pointed out, even though we watch unhealthy amounts of children’s TV, it doesn’t mean that we can write for it or even that we would want to; and he’s right. I could spend another 2-3weeks on this project but I’ve found it very hard not to get distracted.
They say write what you know, but they also say love what you write. What was I thinking? I spend all day with children; my life has become a child’s programme, why would I also want to write about it? Writing dark murderous comedy as a contrast is definitely a lot more fun.
For those of you entering this competition, here is an interesting article by Ben Faulks, creator, writer and star of Mr Bloom's Nursery. He talks about the writing and development process of his show.
Posted by Teenie Russell at 21:58

Email ThisBlogThis!Share to TwitterShare to FacebookShare to Pinterest
Labels: Ben Faulks, Cbeebies, children, Get a squiggle on, Makaton