In a month's time I'll be getting ready to set off to Regent's College to attend the 2nd London Screenwriters' Festival. I have heard nothing but praise by the people who attended last year and can't wait to attend.

The event takes place from the 28th-30th of October, three days packed with over 100 speakers and 70 sessions, not to mention 400 writers and producers.

I am really looking forward to listening to industry experts from all areas, but more than anything, it'll be an amazing opportunity to network with other fellow writers at all different levels. Not to mention that I might get the chance to pitch my comedy to agents and producers at a free Speed Pitching session!

Meanwhile, my writing partner and husband, Taro Russell, will be on baby sitting duty. I think he'll need all of our thoughts to get through the weekend :-)

Georgia On My Mind

This week I have Horror on my mind.

My post was in fact going to be about writing Horror scripts, the different types of Horror movies and the different “monsters”. In trying to figure out a story, my husband Taro Russell told me to think of what scares me the most. After some thought, I concluded that people do. To me, my biggest fear is that of what is concrete. Most horror stories I hear or read don’t involve aliens, beasts, the supernatural; it involves a monster in the shape and form of another person.

This has been re-enforced this morning when I woke up to find that the State of Georgia, in the US, supported by the Supreme Court, has executed a man, Troy Davis, despite the lax evidence against his supposed crime.

Watching my children growing up, I fear the day when I’ll have to let go, allow them their independence, to walk along the streets alone. Stories of people being abducted, innocents being killed daily, victims of a lost bullet, a psycho on a joyride; victims of abuse, of despair, evil. The cities have become a scary place to live in and we live our lives never knowing if this is the day we’ll be the next victims. But all this has always been part of life in the big cities, sad as it may be.

But when a government takes it into its own hands to promote justice, and by doing so end the life of another man, any sense of safety seizes to exist. When those sworn to protect you against evil become the ones to fear, who will we turn to for justice? To me, Troy Davis was just a man I heard of for the first time last night when the world called for mercy; to others, he was a son, a brother, a friend. Today we mourn; not just the loss of a citizen, but the loss of human rights.

That to me is the scariest of all horrors.
Posted by Teenie Russell at 14:48 No comments:

Wednesday was a good day. Sitting in my sons’ room before 5am my mind started to float between dream and consciousness. That’s when the idea came.

By 6 a.m. I was ready to write and the thought of having to wait was killing me.

At 8 a.m. I could wait no longer. I left the kids playing with their dad and went to have a “shower”. As I sat in the bedroom, not taking a shower, I wrote. Thankfully, for my husband and the kids, it was a one-page script.

I have now typed it up and re-written.

This is my entry for a competition for the upcoming London Screenwriters’ Festival.

It is just one of many writing opportunities that I have come across in the last couple of weeks, so I thought I’d list a few here: 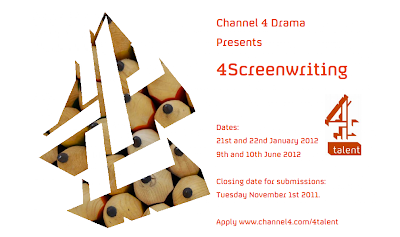 
If you know of any other current opportunities, please leave a note in the comment section and I'll add it to the list.
Posted by Teenie Russell at 23:35 No comments: