I am currently developing my 3rd sitcom! It sounds great doesn't it? The truth is, I've gone nowhere with the first two. No matter how many times I read them or rewrite them, something doesn't feel quite right. I simply do not love them enough to even get some professional notes on them, let alone submit them to Producers.

Rather than insisting on something that's not working, I started fresh with a new idea that I've been wanting to write for the last couple of years.

It's not just the sitcoms that sit stored away in my computer, I also have a couple of features and various shorts, none of which I have deemed worthy enough to be shared. It's really bugged me though that I've not been able to just focus on one project at a time and feel the constant need to move on and start a new script. I feel like a child that desperately wants a toy but is easily distracted by a fly.

Then last week I baked my favourite cake ever and I realised that just like my writing is just like my baking. I'll explain.

I've always enjoyed baking and would never miss an opportunity to do so but it wasn't until the kids came along that I started to get a little more creative and ventured into the world of so-called novelty cakes. I admit, they are not the most mouth-watering cakes out there but they can look amazing.

My first attempt at a novelty cake was a 3D Frog for my niece from Debbie Brown's 50 Easy Party Cakes book. I remember being praised for my cake,  but you know what they say about family reading your work, well, it's the same in the cake world. It's very kind of them but I'll let you all judge it for yourselves. Let's just say, my frog wasn't very happy. 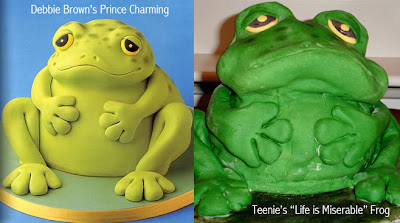 A month later it was my son's 1st birthday and his poor rubber duckie cake was a complete let down.

And so, the years went by and I kept on baking novelty cakes for various occasions. There were a couple that were quite disastrous, especially a 3D skull cake I baked for my little brother, but overall they were coming together quite nicely, especially the princess castle I baked for my niece's 4th birthday.

With every bake, I would get more compliments and comments that I should be selling my cakes, but the problem is, when you're the baker, you know where all the cracks are. You might be able to cover them and offer the cake at a different angle for others to view but to a perfectionist like myself, it just wouldn't do. I wasn't confident enough in my work to allow others to pay for it.

Then I baked a Star Wars cake and the response was so overwhelming that I finally allowed myself to start thinking bigger. For once, I was happy with it. It was absolutely not perfect, Yoda for example was bigger than Han Solo and Princess Leia, and Darth Vader was on the short side, but in terms of the actual cake, I was satisfied. 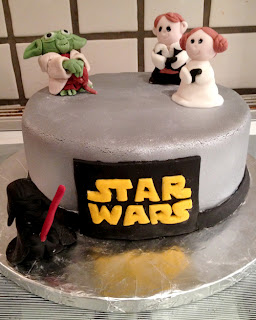 I was ready to move on to the next stage and when a friend asked if she could hire me to bake her daughter's cake, I did not hesitate to say yes. The party isn't for another 2weeks and I'm still keeping my fingers crossed that all goes well, but I am truly excited.

Meanwhile, I got the chance to do another 3D cake - Lightning McQueen. I hadn't done a 3D cake in a little while and I was picturing something that looked like McQueen but wasn't quite him. I baked my sponge and set of to mould it and frost it. The following day I had a look and it simply wasn't McQueen. I hesitated a little but then got a knife out and started to hack through the frosting. I was determined to make him perfect, not just something that looks like what it should be. By the time I was ready to add the sugar paste, I was satisfied that it was as good as it could be.

When my son walked in from school, his face lit up and all he could say was "Wow", and we know kids don't lie (maybe sometimes). I had made my best cake ever and I was impressed by my own work. Not only was the finish to my satisfaction, but the structure itself (the sponge) was quite seamless. 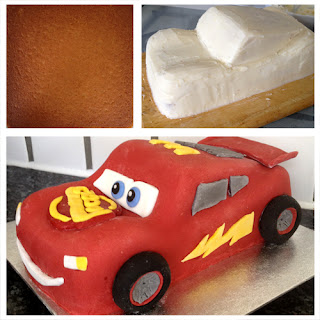 It's taken me 4years to finally accept that I can in fact create a cake that others will want to buy and I suddenly realised that it's for that same reason that I am yet to have a script that I am completely satisfied with.

So for now, I'll keep on writing and rewriting and who knows, the day I'm happy enough with my writing and stop giving myself a hard time about it, I'll finally get the professional notes that will help me improve it further.

Meanwhile, if anyone needs cake, it'll be my pleasure :-)
Posted by Teenie Russell at 13:53