The Juggling Life for Me

April is over and I survived. What a month! It's been mad but it's also been a lot of fun. 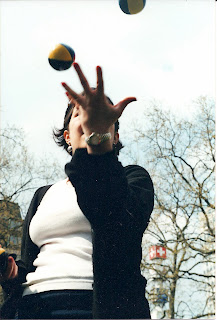 On the first of the month I was off on a writing frenzy in an attempt to get a 100 page script written within the month. I was very excited about the fact that I was going to be writing my first feature, but not quite certain that I would actually complete it. It was going to be a challenge!

As a Stay at Home Mum to a 1yr old and a 3yr old, life is busy and writing has to be worked around them and their routines, but hopefully after being home for about 3 1/2 years I've mastered that and it was not going to be a deterrent.

My main worry was the fact that on top of having weekends taken up by friends and family, Mr Russell was going to be home for 12days at the end of the month, at which point we planned on spending the days out with the kids. Not to mention that I had to fit a party into all that which required planning, shopping for, cleaning and preparing. Yes, writing was going to be a problem.

If I ever was any good at juggling, which frankly I just about get by, it was time to put those skills to the test. I was determined not only to complete the script within the deadline, but to also be there for my family and enjoy some well deserved days off.

WHAT DID I DO?

Set aside any other writing - I had just completed a 1st draft of a TV pilot, and even though it was fresh in my mind and I wanted to re-write it soon, I passed the ball to Taro, whom I was collaborating with. If I had any brain wave about anything not related to the main script, I would quickly jot it down somewhere and forget about it. There was no time for side-tracking.

Write whenever and wherever I could - I made use of the old-fashioned pen and paper on many occasions. I write faster than I type and it’s easy to cross out and start again, so it made sense. Plus, it can be used anywhere, even whilst sitting at the top of the stairs waiting for an over hyped child settle for the night. I would normally at this point play Angry Birds anyway, so why not write instead?

Set healthy goals - Once I had good solid descriptions for the next scene(s) down on paper, typing it up whilst adding flowers and dialogue was a lot faster and easier; without much thought I was churning out 5-10pages a day, well ahead of the 3-4page target. That was a huge motivator to keep me going at that pace and I love to compete, even if it's with myself. I suddenly had a new goal, to complete the script before the Easter break. Once that break came along, I knew writing would be hard and very stressful. I also wanted to enjoy it as a holiday rather than any other day.

Change my routine – I generally write better during the day when I’m still awake. Evenings are usually a time for relaxing in front of the TV, reading a book or tweaking a script. That works fine if I’m either working with no deadline or on a half hour programme or short, but for this challenge to work I needed more writing time. Mr Russell was very understanding and helped out by playing some games on the PS3 instead.

To Do Lists – Back in my working days I valued my To Do Lists. They were essential and I had them not only at work, but also at home. Lately however, I’ve been relying mostly on my memory, which I’m quite certain shrunk a little every time I got pregnant. So to get through busy periods, I get back to the organised, OCD me and get those To Do lists going.

Adjust to changes – Not far into April the Sun decided to visit. I love hot sunny days, I really do, but I had to re-think my routine. On a certain day, for example, I got the paddling pool out and let my eldest splash around. Not a problem, he could splash, the little one could nap and I could write. Perfect. I knew though that my niece who lives a few houses down was on half-term break and that both her and my son would love to play together, but it would mean that I couldn’t write. After trying hard not to give in, the mummy inside thought she was being unfair and to make matters worse, the Sun shinning in through the windows kept highlighting the need to get those clean. Minutes after giving in, my niece and son were over the moon splashing together whilst I cleaned the windows and my sis helped keep it all peaceful. That day, when all was quiet and the Sun was setting, I sat down and typed away.

It took focus, it took organisation and it took determination, but I got there. On the 20th of April, the night before Mr Russell started his annual leave and with 10days left until the end of the month, I typed FADE OUT. That was a great feeling. I had done it and now have a feature. An extremely rough draft, which will need some work to even make sense, but a 100 page script nonetheless (even if I do admit to being disappointed at the fact that it’s 100 pages exactly and not just that little longer).

Oh hello May, so what do you have in store for me? Some Sun and tequila? Oh, yes, some re-writes and possibly a couple of shorts. I hear ya, challenge accepted.

How do you go about juggling writing and other commitments? Please share your experiences and views.
Posted by Teenie Russell at 19:47